Still smiling from inside and out.

This was since NBCnews Chicago aired their special segment called "Blogging For Buck$ - Secrets to Cyber Success" that featured me and another blogger friend, Bobblehead Dad Jim Higley. 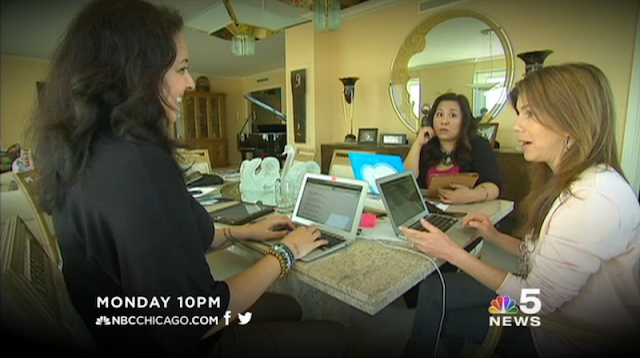 But it was a very different scenario days before the night it aired. Of course there was the excitement of the actual filming day but I was nervous. Afraid that things will be taken out of context and the false and misconstrued reality of professional blogging will be seeping through like the all too common feature on bloggers today. You know, the one where all bloggers are lumped together as the swag-grabbing-mommy-blogging-horror kind of story.

Days before the actual filming I even confided with the reporter about what my worries were. She talked me through it and assured me that the things she was looking for are not anything where my concerns were on. But still during the interview I was very cautious with my words but in the end I felt somewhat content that the questions thrown at me where ones I was prepared to answer.

A few days before airing, NBC Chicago's Facebook header was changed to this:

Soon after that Kim Vatis started posting nice tweets and tagged me along but I was afraid to even retweet and promote but did anyway. The nervousness started building again.

Monday night came (the night it aired) and Jim Higley and I poked fun about possibly not having a blogging career after the 10pm special. My hands got cold and paced the living room back and forth watching the news start. They were showing teasers in between the newscast before the special segment came on and suddenly, blips of my children that were gathered from this blog were showing between commercials and I got giddy and excited.

Then it came on and have not stopped smiling since. So grateful to Kim Vatis of NBCnew for this wonderful opportunity! Can you imagine if I did say no?!

A big shout-out to Beth Rosen for letting me film with her at her place and also to Dwana who joined in on the filming.
Labels: Blogging NBC News TV Show

Michelle said…
I love that NBC featured a more ... balanced story about blogging. And you are definitely a perfect candidate to represent for it. I can only imagine how nerve wracking it was, but congrats!
Friday, May 17, 2013 at 8:34:00 PM CDT