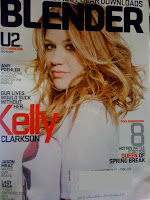 I've been getting the BLENDER magazine for months now and have been dumping every issue in the garbage. I don't know exactly how I ended up subscribing to it, but I have an inkling that it was from the years of untouched mileage I had with NWA that was overturned into magazine subscriptions instead. I still wonder why I chose it then. Maybe I thought it was some kitchen accessory magazine?!

So last week when I had a few measly moments to myself, I picked up the magazine and decided to at least read before I dump another issue. Only then did I learn that it is a music magazine.

Even so, there wasn't really anything in that magazine that I got interested with. Probably because it was geared towards the young and hip. And I am so far from that.

But still, I gave it a another chance. I kept reading. 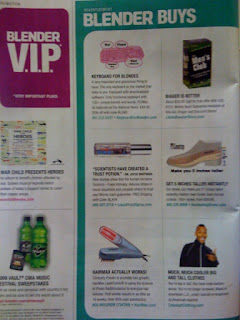 But there is one thing that caught my attention and even left me laughing. A page section of advertisements called BLENDER BUYS. In there listed:
I was giggling as I read them to my husband and exclaimed that "these ad products are for Men who has serious self-esteem issues, or just plain weirdos". And talk about "deceiving people into believing what you're not".

And he said, "well isn't it the same thing as push-up bras, spanx, high heels and fake lashes?!" (All of which I use) HAH! So true!

Kim Moldofsky said…
Dang MJ. I thought the title meant you'd be sporting a new look when I see you later this week for Food Pantry packing.