My kindergartener has always had quite a photographic memory. He was about 16 months old when I first remembered the time he knew where I had placed things that done weeks before. There was also a time when we didn't think he was listening while my husband and I were looking for a certain something and he got up and pulled it out for us. Ever since then, we would ask him if he's seen the remote on this table or the keys on that dresser, and almost every single time he'll remember where he saw it last. 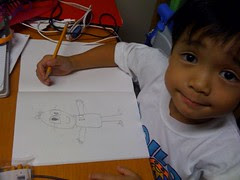 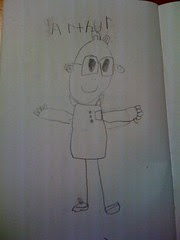 In school, they are starting to write in Chinese characters. Memorization plays a role on which brush/pen stroke means what. One wrong placement of a stroke can mean a whole different word. Quite obviously, he has excelled in this as well. Well, today I found him drawing Arthur (one of his favorite cartoon character) without copying from any materials. All purely from his photographic memory. I am still in awe of what his little brain can do.

But can someone tell me, why the heck can't he remember to eat his school lunch? I ask him every day "Did you eat your lunch"? He'll say "No". Not because he doesn't like the broccoli or the meatballs. Nope. He simply says "I forgot!"
Labels: Kids

Mom2Amara said…
Wow, without even your caption, I knew that was Arthur! What an artist!

And btw, Amara doesn't forget to eat her lunch. She just doesn't eat because she's too busy chit chatting with her friends. Dad2Amara says like mother, like daughter!
Tuesday, October 14, 2008 at 7:21:00 AM CDT

Anonymous said…
My 6-yr old and I knew it was Arthur right away! Congrats on your little artist/genius!

Glad to know that it isn't just this Mommy's imagination that he drew something so well. :-)

Jenny said…
That's a great drawing. What I would give for a photographic memory. It would definitely help my mommy brain.
Wednesday, October 15, 2008 at 12:27:00 PM CDT