This Sunday morning I woke up with my two boys playing with their new game Monopoly Jr. at the kitchen table. My eight-year-old was reading the directions on how to play the game and directing my five-year-old son the rules. I enjoyed watching and listening to them because this kind of cooperation between the two of them always breaks into one of them crying on the end. But not this time. It took a long while until they got tired playing before they decided just to sit on the couch and talk. My boys are clearly maturing.
They talked about yesterday's celebration of my middle son’s birthday. We invited his entire preschool class and their families to join us in watching Aladdin – the musical (Yes, the Disney version). My boys enjoy watching theatre and we knew this was going to be a treat for him. And to double the fun, having 73 of his friends and their families there will be extra special. 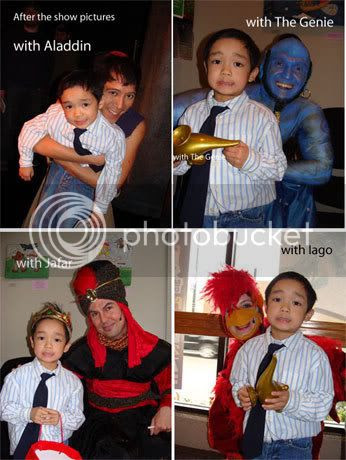 The children’s production at Emerald City Theatre did an awesome job. They were funny and interactive with the kids. The Genie and Iago were especially great, and Aladdin was charming (who by the way is Filipino! More power! Hehe). OK – just to be a little bit of a theatre critic here – I must say that they were a bit weak on a few lines that could’ve been hilarious if it delivered timely and a tad too much on lines that are funny for adults but too hard for kids to comprehend. In all fairness, I know that it is the very first day of their showing and I’m sure that they are learning on how their audiences respond to those certain parts. Oh and uh hmmm --- they were a little off-tuned (cringe) on the end part of “A Whole New World” song, but I’m not sure if it bothered anyone. Ok, enough critiquing already – this was, after all, a children’s production and I was nitpicking on things that anal-retentive ones like me are probably the only people who noticed. Princess Jasmine announced my son’s birthday at the end, and the whole theatre audience greeted him loudly as one of the theatre crew members handed him some presents. All in all, It was magical to say the least, most especially to my birthday boy and all his little guests. And really, that's the most important part of all.
Thank you to Melissa of the Emerald City Theatre and the rest of the crew who tirelessly answered my non-stop questions and in helping this mama make it more special for my boy! Everyone was so friendly, and it was such a great experience that we may just do this again! I highly recommend your services to parents who are looking for fun, highly entertaining, and educational party.
After the show, everyone was also invited to continue the party for some food and more fun at the Horner Park. More guests came to the park as well. I’m glad that we decided to get a party room since it was a little rainy. There were noodles (for longevity, of course), chickens, hot dogs, and much more. The kids enjoyed running around the huge room and the parents got to chat with each other. The Genie cake was another highlight for the kids and it surprisingly didn't take long to gather them all for the traditional blowing of candles, Happy Birthday song, and group pictures. As each child left the party, we handed out Disney tin boxes stored with cars and sweets for boys and Princess Jasmine necklaces and sweets for the girls. The party was a hit!
As soon as we got in the car to head home, all 3 of our children fell asleep. Each one of them with a smile on their face. This birthday will be a memorable day for the family. Happy Birthday, Baby! I can’t believe how fast you’ve grown! I hope we granted you all of your birthday wishes. We love you like crazy!
--------------
And oh --- this party would have never been possible without the uncles, aunts and grandparents who helped me set-up at Horner Park. Thank you so much family!!!
Labels: Aladdin chicago Disney Emerald City Theatre Horner Park Kids musical musical review

Stephanie Wilson she/her @babysteph said…
That sounds AWESOME! And I was just thinking one of those jump rental things would be a good way to celebrate one of my boys' next birthdays. This was a great idea!

MJ Tam said…
**mom of four** Yup, too bad you guys moved out of Chicago!

**Steph** Those jumpy things are great too. Unfortunately they are usually too big for us to do here in the city. Our yard would not be big enough to occupy one of those.
Monday, May 5, 2008 at 8:20:00 AM CDT

Anonymous said…
wow! What a fantastic party! Glad everyone had such a fabulous time.