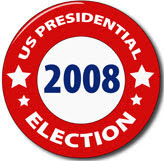 I’m still undecided on whom I want to see as President because frankly I don’t see any of the remaining candidates as someone I can really back up. You would think that being a woman I’d go for Hillary, but I’m really not for Hillary. Actually it’s because I am not for Bill Clinton. After seeing Barack and Hillary battle it out on debate yesterday, it was clear that Hillary is a better candidate than Barack, but I can’t seem to get over the fact that Bill Clinton can possibly be back in The White House - a place where he so cockily (no pun intended) took advantage of his power to live like he was Hugh Hefner in his mansion.

Hear me out on these 2 main reasons why I choose not to vote for Hillary:

1.) As a woman myself, I cringe every time I remember those many interviews that she didn’t stand up for herself and her daughter the whole time that Bill Clinton made an ass of her with the Monica Lewinsky fiasco. I can’t imagine having to stand up beside my husband on such a flagrant behavior and something that has happened over and over again. Sure she probably shouted and got mad at him behind doors, but she is still with him and quite frankly I guess I was waiting for an all-out Gloria Gaynor style "I will survive" drama. Can you blame me?

2.) As a wife, I find it uncomfortable and strange when Hillary said on TV that she could easily control Bill because there is only one president at a time. I can never imagine saying that I can easily control my husband, or vice versa, because there is obviously no respect in a relationship where you have to result in having to control one or the other.

Now, do I really want a woman president like Hillary? No thank you. I know these are all personal reasons and not so much of what they stand for on certain issues, but that's just how "I" gauge my role models.

As far as Barack goes, I don’t know. I don’t think he is experienced enough and he is gaining lot of followers because of color. I guess I can understand why people of color will naturally pick him for the position, like how women are naturally gravitating to Hillary. But it really shouldn’t be because of color, or sex, or even political party for that matter. Well okay, maybe yes on the political party. But that's a whole another topic I want to tackle on another day.

What do I think about McCain and Romney? I haven’t truly begun to pay attention on them yet. And the way things are between Hillary and Barack, I may just tune in and see what those 2 can do for me.
Labels: Barack Obama Hillary Clinton John McCain Mitt Romney Presidential elction 2008

What is relevant to me in a Presidential candidate are their stances on issues and their past history. The USA is founded on the rule of law as based on the Constitution and the Bill of Rights. When it comes to Hilary Clinton, the history of her actions is very clear and very long. For me, if the American government would actually follow their constitution- the US will go back into a great nation.

Anyway, I found your link from Filipinamom. :) Have a wonderful evening.

MJ Tam said…
Ana I couldn't agree more with you on what should be relevant on choosing a rightful President. But "I" can't help but initially sort them out based on what I know about them. I guess you can call that human nature. Only then I would dig deep down to read more about that person if he/she seems to be worth my time.
Friday, February 15, 2008 at 2:45:00 AM CST