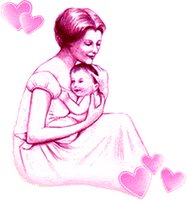 --------
The mother who gave birth to the most children was the wife of Russian Feodor Vassilyev. Her 69 children included 16 pairs of twins, seven sets of triplets and four sets of quadruplets.SOURCE: "1997 Guinness Book of World Records"
--------
"Happy Days," starring 1950s mom Marion Cunningham, started as a pilot segment on "Love, American Style." The episode was about a family getting their first TV set.SOURCE: Total Television
--------
Olive May Osmond is mother to musical siblings made famous by "The Osmond Family Show." The performing brothers and one sister include: Donny, Marie, Alan, Wayne, Jay, Merrill, and Jimmy. Donny and Marie also had (and have) their own show.SOURCE: Total Television
--------
Mother Jane Jetson's voice was provided by Penny Singleton for "The Jetsons," while Jean Vander Pyl portrayed mama Wilma Flintstone in "The Flintstones."SOURCE: Total Television
--------
On July 18, 1994, 63-year-old Rossanna Della Corte of Canino, Italy, became the oldest woman to give birth.SOURCE: "1997 Guinness Book of World Records"
--------
Lucy gave birth to Little Ricky during the January 19, 1953, episode of "I Love Lucy." Lucille Ball gave birth to son Desi Arnaz IV on the exact same day.SOURCE: Total Television
--------
In 1992, Dan Quayle said he considered the unwed mother played by Candice Bergen on "Murphy Brown" an example of Hollywood irresponsibility.SOURCE: CNN
--------
The first woman to give birth in an airplane was Mrs. T.W. Evans on October 28,1929, over Miami.SOURCE: "Famous First Facts"
--------
Previously, Mother's Day was marked by a special church service at which members of the congregation wore white carnations.SOURCE: "The Folklore of American Holidays"
--------
The first Mother's Day was celebrated only in Philadelphia on May 10, 1908.SOURCE: "Famous First Facts"
--------
Stereotypical mom June Cleaver first appeared in households in "Leave it to Beaver" on October 4, 1957.SOURCE: Total Television
--------
President Clinton's father was killed in a car accident before he was born, leaving his mother, Virginia, to raise him alone until she remarried four years after his birth.SOURCE: "1998 NYT Almanac"
--------
The first woman to give birth in the White House was Martha Randolf, daughter of President Thomas Jefferson, on January 17, 1806.SOURCE: "Famous First Facts"
--------
Mother's Day was declared a national holiday in 1914 by presidential proclamation. It was conceived by Anne M. Jarvis of Philadelphia in 1907 after the death of her mother.SOURCE: "The Folklore of American Holidays"
--------
Augusta Bunge became a great-great-great-great-grandmother at age 109 on January 21, 1989.SOURCE: "1997 Guinness Book of World Records"
--------
Mother-in-Law Day is celebrated on the fourth Sunday in October. It was started in 1934 by a newspaper editor in Amarillo, Texas.SOURCE: "Holidays, Festivals, and Celebrations of the World Dictionary"
--------
The first televised birth was on December 2, 1952, by KOA in Denver. Lillian Kerr had a Cesarean section as part of the "March of Medicine" program.SOURCE: "Famous First Facts"
--------
In 1907, Russian writer Maxim Gorky penned "Mother," later considered the first work of socialist realism.