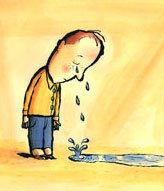 When I got home at 1:30pm today after running mid-morning errands, my kindergartener's teacher left us a message in the answering machine. She had asked for me to meet and talk with her after class today at 2:45 pm, and because the message sounds so uneasy I instantly got so nervous. This is the first time that the teacher has ever called me at home, so it must be serious.

I got really antsy and my stomach was churning. I was running stuff in my head, thinking of worst-case scenarios, like someone has hurt my child etc...etc...The hour and a half wait felt like a lifetime of suffering. I was panicking deep inside.

I got to his class and immediately the teacher pulled me aside. She said that my son has complained that his "private" hurts. And she asked him so many questions if it hurts when he pees, or when he walks, etc. Or did he maybe bump on something? But my son is supposedly just quiet and too embarrassed to talk.

I was dying deep inside. What is happening to my boy? As soon as I saw him, he instantly cried. My heart felt like it dropped. I hugged him, and asked what's wrong but he wouldn't say. I felt so helpless. We walked outside the school and I looked at him straight in the eyes and I told him as I always say - that he can tell me anything. He said, "Someone hurt me". I wanted to die right there. I kept looking strong for him, and said please tell me more.

But then he said, "I didn't want Bryan to get in trouble, Mama". Bryan is his classmate. He was sobbing so badly. " Well, what did Bryan do?" Then he said "He punched me in my private part". Somehow, I was relieved (breathing better at this time) that it wasn't what I was thinking. But I investigated more - and asked how it happened. He said that Bryan just hit him for no reason. Not even playing, and it happened while they were in line to leave the lunchroom.

We marched back in the school to report back to his teacher about what happened. I told him that maybe Bryan was playing and he got too rough and so he needs to be told that he shouldn't be doing that. And I told him that I understand that he is concerned about getting Bryan in trouble, but that Bryan will never know that he had hurt him bad if he wasn't told. So we went to his teacher and the teacher was especially apologetic and explained to him that she's there to make sure that he doesn't get hurt and that Bryan needs to understand that he hurt him. The teacher assured me that she would talk to Bryan and his parents.

My son seem a little more relieved that he was able to come out with it. But he did say that he's still hurting down there. Poor baby. I'm sure he's just sore, and he added that it was not his private that got really hurt, but more in the upper groin area. On our walk back to the car, I told him how proud I was of him. That I was so proud of him telling me.

When I got back in the car, I sobbed non-stop. My boy is fine...Thank God he is fine.

The exact same thing happened to my nephew!

You did the right thing too. My nephew covered for the kid that kicked him for a long time.

Mama Grouch said…
Oh my god, I can't even imagine how hard that must have been. I almost cried with you by the end of the post. Good for you and good for him for dealing with the situation so well. My heart goes out to you for the anxiety you went through, but I am glad it turned out ok.
Saturday, April 8, 2006 at 10:17:00 AM CDT

Anonymous said…
Poor thing. It must have hurt so badly. How awful to feel so helpless. I'm dreading the first time it happens to my daughter (well, not that particular thing, but just getting hurt by someone).

Kel said…
Poor little guy. My eyes welled up with tears just seeing the title of your post.

I dread when I have to deal with that with either of my 2 boys.

Heather Bea said…
How scary, I am glad that it ended up okay. It really is great that he was okay with talking to you about it. It shows that you are raising you son to be able to trust you with information that is sometimes embarresing.
Sunday, April 9, 2006 at 11:32:00 PM CDT

Valerie said…
oh gosh that scared the crap out of me. I was thinking the same thing you were in tthe beginning. I am glad he was able to tell you what really happened. How scary.
Monday, April 10, 2006 at 10:43:00 AM CDT

And thank God that the teacher contacted you instead of immediately calling CPS as some do.
Monday, April 10, 2006 at 4:43:00 PM CDT

Mom on the Run said…
This same thing happened in my daughter's kindergarten class, one of the boys punched another right in his 'private parts'. Just for no reason. It sounds like you handled it really well and its great your son can talk to you!
Tuesday, April 11, 2006 at 12:32:00 AM CDT

MJ Tam said…
Thank you all to those who commented to this posting. It didn't feel like I handled it well at first (like I need to do more) but because of you guys I feel more at peace with the whole situation.